In June of 2010 xRez Studio set out to document one of the oldest rock art panels in North America, known as Shaman’s Panel. Located in a remote side drainage of the Grand Canyon and under the jurisdiction and protection of the NPS, it is a difficult site to locate, which has likely contributed to its somewhat limited vandalism. Estimated to be between 3,000 and 15,000 years old, it is extremely fragile and is marked by much wear. In spite of the condition, it exhibits a rich layering of successive and evocative paintings created over a long span of time by many Native Americans. It also displays unique polychrome features, including green suns, a mountain lion with red claws, and trademark otherworldly figures.

xRez set out to document the landmark panel with new photogrammetry and gigapixel techniques under development in the studio. Placed on a steeply slanted overhang, camera access was limited, so a base series of 182 vertical overlapping shots were taken at increments across the length. Next, multiple survey angles were methodically shot of the entire geologic surface, in order to later regenerate the topology with dense cloud-based photogrammetry. In post, all 182 3d camera positions were recovered from this process and used to texture the mesh surface in 3d in Maya utilizing the 182 21MP full-resolution images. Finally, a true orthographic projection was rendered in Mental Ray at over a gigapixel in resolution, viewable below.

Jon Harman‘s excellent ImageJ plugin DStretch was then used to reveal faint and obscured details in the images by manipulating color relationships in the original gigapixel image, which can be seen by clicking on the “false color” buttons in the image below. Some artwork largely undetectable to the naked eye can now be perceived more readily.

Additionally, a motion-control rig was used recently to shoot across Sky Rock outside of Bishop, CA in the Owens Valley, one of the few rock art panels which face upward to the sky. Also included in the video is Wahweap Hoodoos in Utah and CalTech Radio Observatory in the Owens Valley, CA. 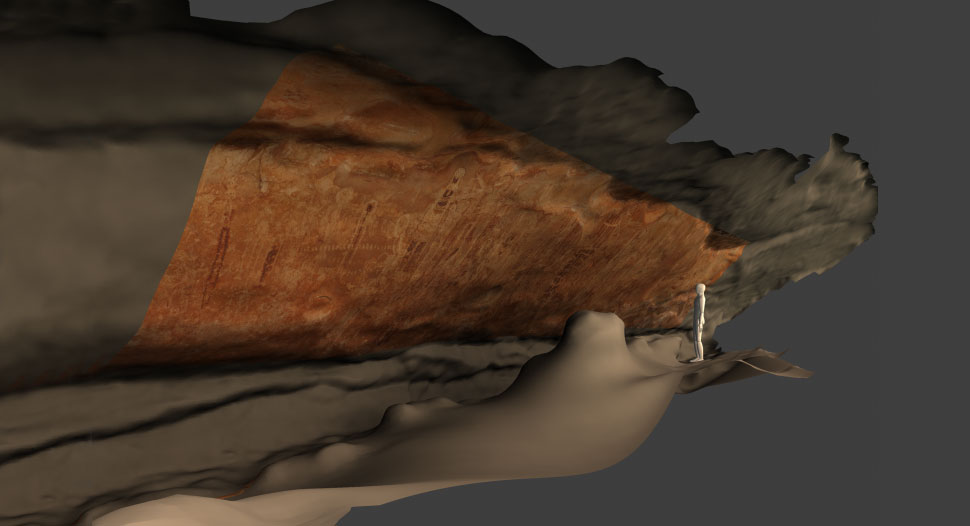